Based out of Adelaide, Australia, BEYOND MORTAL DREAMS‘ EP Dreaming Death unearths savage incarnation of death metal darkness. Expect a merciless blast of desolate bestiality and epic devastation hitting hard on all frontiers. As cliché as that sounds, this is the real deal, kids. At only four songs long, this EP proved dynamite comes in small packages; it’s overflowing with creativity, skill and own vision of how death metal brutality should sound. It’s the understanding to the aesthetics of the genre going hand in hand with undeniable talent that allowed BEYOND MORTAL DREAMS to create such an unrestrained sonic assault.

Dreaming Death, originally released by the band as an MCD in 2012, stood out as one of the best death metal releases of the past year. The material is now getting a 12″ MLP vinyl treatment via Lavadome Productions. The release has been specially mastered for vinyl and comes pressed on oxblood, one-sided 12″ wax with pentagram etching on the blank side. Limited to 350 copies, Dreaming Death will be out in May. Digital downloads to be made available through major retailers.

Watch out for upcoming BEYOND MORTAL DREAMS releases via Lavadome including a 7″ EP containing one new andone re-recorded song and a full-length album later this year as well! 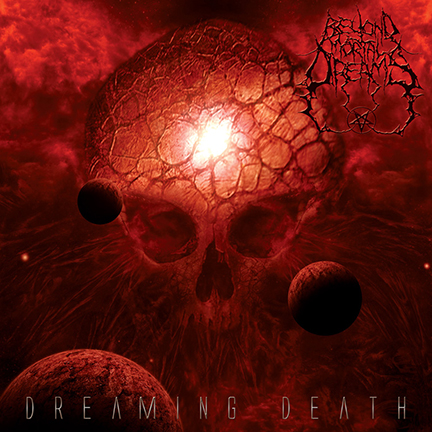 1. Feast Of Carrion
2. The Filth Of Their God
3. Dreaming Death
4. Beast Of Damnation (Beherit Cover)

BEYOND MORTAL DREAMS is: