Summoning The Bygones is BILOCATE’s early visions presented in a new outfit, we’d like to share the same spirit and music and ideas we had 7 years ago with different arrangements, production, and sound quality.

The album also includes a fully modified version of “Days of Joy” under a new name (which is actually the very first name this song had originally when it was created in 2003, in addition to a brand new song and a cover of Dead Emotion for one of the legends in Doom / Gothic Metal genre PARADISE LOST from their legendry album “GOTHIC” rearranged totally in BILOCATE style, it’s a way of celebrating 20 years from the release of this amazing record that created a whole new metal genre. we hope you’d enjoy Summoning the Bygones. 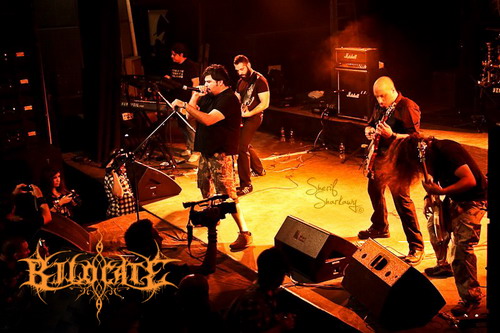 The tracks “Hypia” and the legendry 20 mins “A Desire to leave” feature the metal icon DAN SWANÖ as a guest vocal, we divided “A Desire to leave” into 3 parts that can be listened to separately or as a full track. It’s our way of creating an album inside an album.

The track listing for the effort is as follows:

8. A Desire to Leave

Summoning the Bygones artwork and promo track will be announced soon.

“Summoning the Bygones is an old vision with a totally new arrangement, we took the tracks and rewrote many parts of their music and lyrics from scratch but kept the old spirit that everyone enjoyed in Dysphoria, the album will remind our fans of what we’ve given them before but they will surly feel the change… it has many passages and will carry you onto a heavy, fast, dark oriental metal journey” commented vocalist Ramzi Essayed.