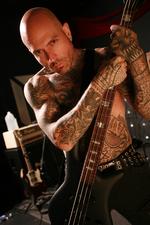 The members of seminal NYC Platinum hardcore/metal band Biohazard have announced that bassist/co-vocalist Evan Seinfeld has left the line-up.

“We have a long history together, but it’s time for a change,” said guitarist/co-founder Bobby Hambel. “We wish Evan well.”

Scott Roberts, who played on the band’s 2005 „Means to an End“ album and has been part of the BIOHAZARD extended family since, will step in for Seinfeld when BIOHAZARD plays the UK’s Download Festival on June 12, and again on June 13 at the Metal Hammer “Golden Gods Awards” in London. Hambel, guitarist/vocalist Billy Graziadei and drummer Danny Schuler will begin scouting for a permanent replacement when they return to the U.S.!

BIOHAZARD has just completed their latest effort with producer Toby Wright, which marks first new studio album in six years and the first with the original lineup since 1994’s „State of The World Address.“ The album will be released this fall, and will be followed by an extensive world tour, with concerts planned in North America, South America, Europe, Asia, and Australia. “We had a great time recording this album and we’re psyched about it,” said Graziadei. “We’re really looking forward to having everyone hear it and to get back on the road to rip it up!”

“I think it’s one of the best albums we’ve ever done,” echoed Schuler, “so we’re ready to see what the future holds.”

Hot News: Biohazard – As Bad Ass As Ever!

Hot News: Biohazard – To Return To Europe For Summer Festivals!