Ukrainian Black Metallers BALFOR have announced a line up change that sees virtually the whole band depart, with only frontman and guitarist Thorgeir remaining. Commenting on the reason for such a drastic change, Thorgeir said: “We parted ways for a variety of reasons and we hadn’t actually worked together for a very long time. This decision was not an easy one, but it was a necessary one that took into account the needs and interests of all the band members, and I would like to take this opportunity to thank the guys for all this time we worked together, it was a great experience! But sometimes a change is necessary if you want to move forward”

With work having begun on the sophomore full-length album, BALFOR’s new line up, which consists of Thorgeir on vocals and guitars, Warider on guitars and backing vocals, Athamas on bass and vocals and Khaoth on drums, marks a new stage in the band’s development, one that Thorgeir is very positive about. “We have been rehearsing together since the beginning of the year, and I am now very sure that the new line up works just as well, if not better, than the previous incarnation of BALFOR, because new blood has brought a fresh perspective to the band’s music and a lot of enthusiasm. Warider, the new guitarist, is quite young, but hugely promising, whilst Khaoth has honed his considerable drumming skills with Dark Metallers KHORS. Athamas brings with him not only the experience he has gained with bands like DEFERUM SACRUM and RAVENTALE, but he is also a great vocalist, which is able to give an additional perspective to the BALFOR sound”. 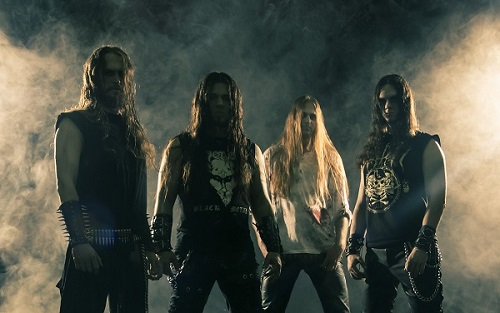 Formed in November 1997 as a side project by Thorgeir and then-guitarist Svart, BALFOR set out to play fast, but melodic, Black Metal and released the “Volki Severa” MCD, in 2002. Encouraged by the response to the release, Thorgeir decided to concentrate all his energies on BALFOR, and developed the band’s style further; creating what he terms “Barbaric Black Metal” in tribute to the history of BALFOR’s homeland.

BALFOR’s four-track “Pure Barbaric” EP was released for free download via a net label in 2006, a calculated risk that was successful in bringing the band to the attention of a wider audience. With Thorgeir able to switch from aggressive black, to soaring melodic clean vocals with consummate ease, BALFOR’s effortless ability to cross the melodic/black/death/extreme metal genres drew the attention of Pulverised Records, who released the band’s debut full-length album “Barbaric Blood” in 2010.

More information about BALFOR can be found on the band’s page at http://balfor.info/