It’s not easy for “underground” bands to release DVD’s. Without major labels behind them who have money to invest in their roster, it’s pretty much a dream for the majority of bands, no matter how much demand there is from fans who are weary of trying to watch their favourite bands on YouTube, at the mercy of the vagaries of their internet connections and with poor sound quality. So Danish Black Metallers BLODARV have taken matters into their own hands, and released a DVD themselves, but in a format that self-financing would permit – DVD-r.

Titled “A Doorway Between Worlds” Chapter 1, the DVD contains videos for tracks from BLODARV’s albums “Soulcollector”, “Linaria Amlech”, “Civitas Diaboli” and the newly released “Gâst”, as well as a live recording from their show at Club Brutal, in Aarhus Denmark, filmed in December of last year. The DVD will be available exclusively through the band’s webshop at http://blodarvshop.bigcartel.com/ 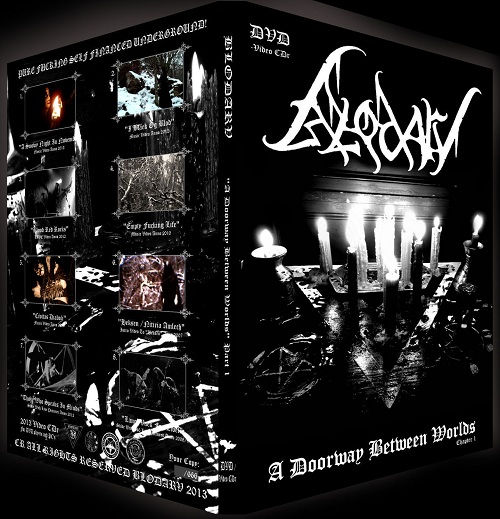 Videos featured on the “A Doorway Between Worlds” Chapter 1, which is DVD player and PC compatible and is limited to 666 hand-numbered copies, as follows:

Commenting on the decision to release a DVD in this format, frontman and founder Hugin said: “The question we were most frequently asked during 2012 was if we ever intended to release all our official videos, which normally reside on YouTube, as a physical DVD. We wanted to start this year by making a little special “Something” for our loyal fans and with that in mind we gathered together eight of our most popular underground videos, and made the DVD-r “A Doorway Between Worlds” Chapter 1, so that everyone has a chance to enjoy it on their DVD player with CD quality sound, on a proper sized screen and without having to wait for any annoying buffering or deal with bad internet connection, which affect many of our fans in different parts of the world”.

More information about BLODARV can be found on the band’s Facebook page at www.facebook.com/blodarvofficial

Twelve tracks spanning BLODARV’s 14-year career can be heard on the band’s SoundCloud player at http://soundcloud.com/blodarv/sets/blodarv