After the success of the debut album “BLACK SPACE RIDERS” in the year 2012, continues the space trip now with a new, official team into the next round: Partnerdeals were closed with Brainstorm Records, Rough Trade and the touragency X-WHY-Z, which support now the BLACK SPACE RIDERS. On the 16th March 2012 will the second album of the BLACK SPACE RIDERS be released called “Light Is The New Black” in Germany, Austria and Switzerland as Digipak-CD and Deluxe-Vinyl-twinpack (180G incl. CD). 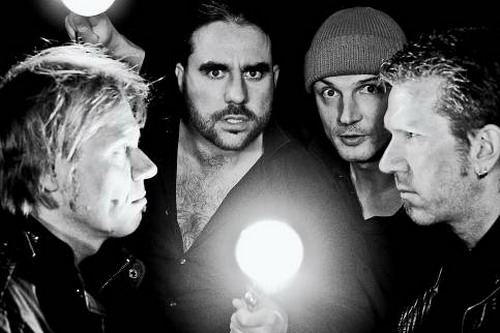 After the debut album “BLACK SPACE RIDERS” got excellent critiques in the rock- and metalworld – also international -, the RIDERS come back now with a new album, which presents clear musical enhancements. Musically BLACK SPACE RIDERS are abolishing the restrictions of the StonerSpaceDoomcorner, which had always been too small for them. The diversification covers heavy, hard, hypnotic walls of sound change to atmospheric passages, followed by driving rockers and sternomastoid anthems. Extremes are explored: there are concise three-minute-punch-ups as well as slowly rising and long epics easily exceeding the eight-minute-limit. There is whispering, singing, crooning, screaming and yelling. You will find wacky soundscapes as well as compact riffmonsters.