Savannah, GA’s BLACK TUSK have commenced work on new material for their upcoming EP. The EP is scheduled to be released later this Spring via Relapse Records.

Drummer James May checked to comment on the progress of the release: “This new release is a mean one. It reminds me of a new twist on an old days BLACK TUSK sound. We got back together with Jay and Phillip Cope to turn this out with some of that earlier, brutal sound you might have heard back in the beginning albums. We figured it was about time to see what the old gang could do years later.”

The band will be taking a break from the studio in March for a short run of headline dates, followed up by a run of shows with Today is the Day, KEN Mode and Fight Amp. The tour begins March 1st in Spartanburg, SC and runs through April 7th in Chicago, IL. 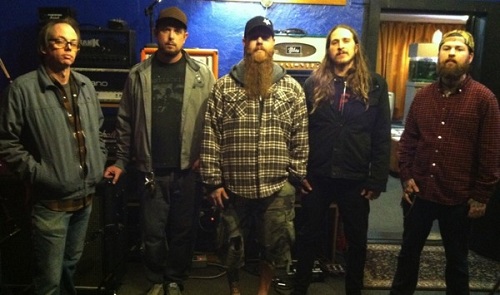 BLACK TUSK is scheduled to appear at this year’s SXSW Music Festival in Austin, TX. Details and location will be announced shortly. Additionally BLACK TUSK are working with UnBlock the Rock (UBTR), an independent grassroots movement, working tirelessly to bring Cuban metal band Escape to the United States in March for this year’s SXSW Music Festival and Conference in Austin, Texas to perform the first Cuban heavy metal concert on U.S. soil. To help UBTR quickly raise funds over the next few weeks to cover Escape’s travel and visa costs to SXSW, BLACK TUSK donated a track to The Red Album, UBTR’s first compilation CD now available by donation at www.unblocktherock.com.

BLACK TUSK latest release Set The Dial is streaming in full at this location.