Wormholedeath is proud to announce that Italian Deathcore combo Bleed Someone Dry have signed a deal to re-release their second album “Subjects” via our label.

The album, wich is now available worldwide through the digital market, features a killer bonus track recorded by the band and mixed by noise-guru Christian Donaldson for this special event.

The song is titled “It’s a secret” and can be streamed here with a very cool Lyric Video (Courtesy of Scrawl Game):

Some of the major digital shop release dates: 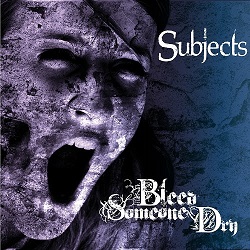 “If you just think of the people that we are talking about, you will suddenly understand why wormholedeath wanted to give its contribution to push Bleed Someone Dry ahead. Little or big step ahead, I don’t care, I just want to help them since I know that they will be grateful anyway. Jonathan Mazzeo is such a great producer and musician and has produced some of our best releases. Alfeo Ginetti already helped our label with some session works when some of our bands were in trouble with drummers. Mattia and Alessio are respected musicians and good friends so it was absolutely a natural step to start working together. Just listen to their new track and you will get a little teaser of what this band is capable of, specially when it comes to brutality. Support BSD , they absolutely deserve it!!”

“We are absolutely proud to annonce that we are now part of the big Wormholedeath – family and because of this great event, we have recorded the new song “It’s a secret” exclusively for them. Thanks to our cooperation with Chris Donaldson, responsible for the success of bands such as The Agonist, Beneath The Massacre, Obey The Grave, the track bear a way more modern and interesting sound wich we consider as closer to the american sound-imprint, exactly where or roots belong to. We would like to catch this chance to show our gratitude to Worm and to the whole WHD’s team for their trust and for the hard work done to support us. We are more than sure that with them all our efforts will be rewarded.”