Today, unclassifiable filth-mongers BLITZKRIEG BABY announce February 28th as the international release date for its brand-new Kids’ World EP through Beläten, the Swedish cassette label known for artists like Trepaneringsritualen, Mika Vainio, Sutekh Hexen, and Xiu, amongst others. It will be released on both cassette and digital-download formats.

Following the release of the acclaimed debut album Porcus Norvegicus (Neuropa Records, 2012), BLITZKRIEG BABY returned to its sty and continued its unrelenting diet of filth and negativity. These elements, digested into black ichor, are vomited back at the world that made them in Kids’ World EP, an industrial, dissonant, and unsettling work that employs any musical element that BLITZKRIEG BABY deems necessary to pound its points in as deeply as possible.

The lack of dogmatic conformity to any genre reflects the omnivorous nature of BLITZKRIEG BABY‘s gluttonous abandon, fusing elements of industrial, electronic, pop, symphonic, and rational cacophony with an articulated vocal delivery into a dystopian soundtrack that speaks to listeners of all kinds of dark music. Thematically, the Kids’ World EP dives face-first into the stink-hole of humanity in the present and impending future: child soldiers, paranoia, rape rallies, broken childhood, terror, and death, often delivered with a sardonic smile.

Despite its long playing time, Kids’ World is released as an EP due to the presence of four tracks previously included in compilations and “Children In Uniform MMXIII,” a reworking of the original track that appeared on Porcus Norvegicus. Cover and tracklisting are as follows: 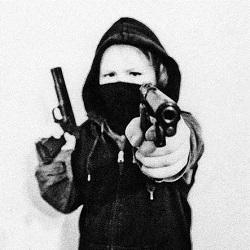 Tracklist side A
1. Kids’ World
2. Loop
3. The Swine Supremacy
4. Those They Could Not Fuck, They Killed

Tracklist side B
5. Half Pig Half Man
6. Broken Child
7. Incinerator Symphony No. I
8. Children In Uniform MMXIII
9. Your Happy Place