French grindcore activists BLOCKHEADS have released the second new song from their forthcoming 5th full-length and first album in over six years entitled This World Is Dead. The track “Deindividualized” is currently streaming via Invisible Oranges here. Recorded in Geneva, Switzerland at Terrier 5 with Jerome of NOSTROMO / MUMAKIL, This World Is Dead features 25 songs clocking in at over 40 minutes of brutally efficient, grade-A, frenzied grind. The album will see its release on CD/LP/Digital on January 22nd (N. America), Jan 21st (UK/World), and Jan 18th (Germany/Benelux/Finland). The album’s artwork and pre-order options are available now at this location while a previously released lyric video for the track “Pro-Lifers” can be viewed here. 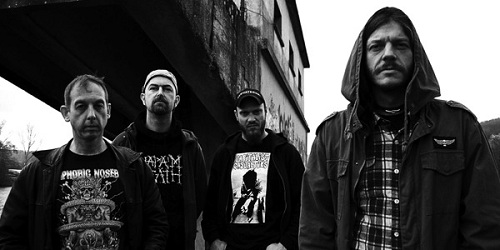