BLOOD OF KINGU, another creative outlet of DRUDKH mastermind Roman Sayenko, are now premiering the first new song taken from their forthcoming third full-length ‘Dark Star on the Right Horn of the Crescent Moon’. The track ‘Enshrined in the Nethermost Lairs Beneath the Oceans’ is exclusively streaming via these official media partners:

‘Dark Star on the Right Horn of the Crescent Moon’ has been scheduled for an August 29th release and is now available for pre-order through the Season of Mist shop. 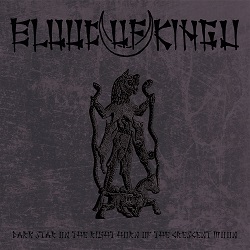 1. Crowned Scarlet Moon Is Waiting For Eclipse
2. He Who Is Not To Be Named
3. Mother Hydra
4. Enshrined In The Nethermost Lairs Beneath The Oceans
5. Red Star On The Path Of Ea
6. Sigil Of The Watcher
7. Prayer To The Gods Of Night
8. The Bringer Of Pestilence
9. The Cycle Returneth

BLOOD OF KINGU evoke the darkness and mystery of ancient cults and secrets. When DRUDKH mastermind Roman Sayenko created this outlet of his burgeoning creativity that has also brought such musically diverse projects such as HATE FOREST, OLD SILVER KEY and RATTENFÄNGER to the world of metal, he dedicated BLOOD OF KINGU to the mythology of Mesopotamia. The lands between the rivers Tigris and Euphrates gave birth to the earliest urban civilisations such as the bronze age cultures of Sumer, Akkadia, Babylonia, and Assyria until the coming of Indo-Iranian people during the iron age. The band consists mainly of DRUDKH members and recently their drummer Vlad joinedBLOOD OF KINGU as keyboarder and timpani player. The musical course of this project has already been charted by the two previous releases ‘De Occulta Philosophia’ (2007) as well as ‘Sun in the House of the Scorpion’ (2010) and steers towards primitive and harsh black metal. With their third full-length ‘Dark Star on the Right Horn of the Crescent Moon’, BLOOD OF KINGU now continue along this direction with the occasional inclusion of thrash and death elements, while laying emphasis on the old school aspect of their sound. ‘Dark Star on the Right Horn of the Crescent Moon’ will appeal to those who like their black metal raw and bloody. As with all of his bands, BLOOD OF KINGU follow Roman Sayenko’s strict policy of no pictures, no interviews and no concerts.

Hot News: Blood Of Kingu sign to Season of Mist!

BLOOD OF KINGU – Sun In The House Of The Scorpion