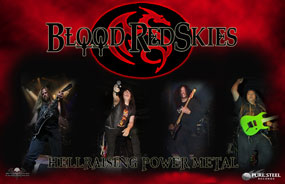 According to an update from BLOOD REDSKIES – featuring ex-VICIOUS RUMORS frontman Ronnie Stixx – the band has inked a deal with Pure Steel Records. The debut album, Conquistador, has a tentative release date set for May/June 2012.

Stixx comments: “As the Blood RedSkies demo, Breaking The Spell, continues to be well received and the debut album being tracked, I felt that having both Dave and Sandy in BRS would be a perfect fit for the band, with Sandy playing intensity and showmanship on bass, as well as Dave’s killer playing. I feel that Blood RedSkies can finally press forward with a killer record and great live performances.”

All the music has already been written with most of it in the tracking stage, the album will have 10 songs on it and we think about bonus tracks. We feel that people will really dig the album…more details will follow soon in the next few weeks.”