Pomona, California thrashers BONDED BY BLOOD have announced the addition of JESSIE SANCHEZ to the band as their new bassist.

SANCHEZ replaces former bassist JERRY GARCIA, who left the band earlier this year.  The newly completed line-up are currently writing songs for a new album, which is tentatively due to be recorded in early 2012.

The band have issued the following statement:

“We are thrilled to announce that our good friend Jessie Sanchez has joined the Bonded By Blood family!  It was a long and devious search to find the right dude for the job, but we are proud to have him in the band slapping the bass for us!  Album #3 is sounding killer so far and we can’t wait to hit the studio some time in January!  Cheers to Metal!” 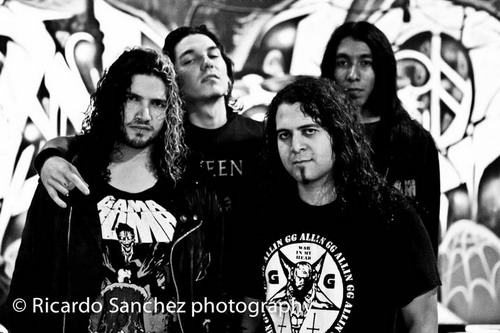 See BONDED BY BLOOD on tour at the following shows:

BONDED BY BLOOD‘s music is also available on iTunes at http://bit.ly/v1tzFH