California’s BONDED BY BLOODare due to enter the studio this weekend to begin recording their as-yet untitled new album.
The follow up to 2010’s EXILED TO EARTH is being recorded with producer and former MACHINE HEAD/SOULFLY guitarist LOGAN MADER (DEVILDRIVER, FIVE FINGER DEATH PUNCH) at Silver Sound and Mt. Olympus Studios in Los Angeles.  It will be the band’s first album to feature vocalist MAURO GONZALEZ and bassist JESSIE SANCHEZ.

“We can’t wait for everybody to hear what the new album has in store.  It’s definitely more diverse and we all had a blast writing it,” states guitarist JUAN JUAREZ. “It’ll be the first record with Mauro and Jessie, who have been great additions to the line-up, and the four of us really connected well during the writing and rehearsing of this album.  The playing on this album will be top-notch.  We’re glad to be recording in Los Angeles, and excited to work with Logan.  We can’t wait to get started and we hope everybody enjoys it as much as we do – watch for video updates from the studio!  YEAH!” 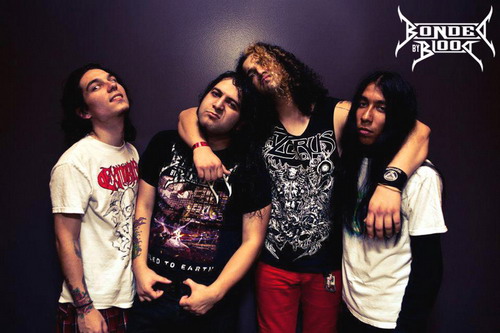 The albums are also available on iTunes at http://bit.ly/v1tzFH