Chicago’s filthiest trio marches out of the sewers of hell with twelve freshly-severed slabs of death metal sleaze! Punk-injected metallers BONES has officially released their second full-length, Sons of Sleaze, on Planet Metal. Album track “13” has been posted HERE. 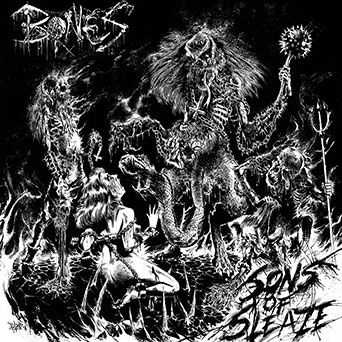 Sons of Sleaze delivers its unfair share of nasty surprises, incorporating violent blasts and low-tuned slime with a dirty rock-and-roll backbone that has never been more apparent, especially when it comes to Jon Necromancer’s undead belch!  The impossibly-heavy combination of Necromancer’s bass and Carcass Chris’s muscular guitar riffs is once again captured in all its devastating glory, and drummer Joe Warlord’s huge vocabulary of patterns and fills keeps the energy level in the red for the entire 37-minute beating that is Sons of Sleaze.  Held together by a cover that could only be called “a new low” for artist Putrid, this album is highly recommended for the rotten-hearted, ill-natured, and furious! Sons of Sleaze was recorded with Sanford Parker (Lair of the Minotaur, Nachtmystium).

“This is death metal for those who favor the genre as an pure underground thing. No fancy stuff or anything elegant here, just real death metal, pure and simple.” – Eternal Terror

“The 12 songs that comprises Sons of Sleaze come and go with little surprise (other than Bones’ blasting rendition of Terroroizer’s Fear of Napalm), yet entertain in their brief hack-n-punch delivery.” – Worm Gear ‘Zine 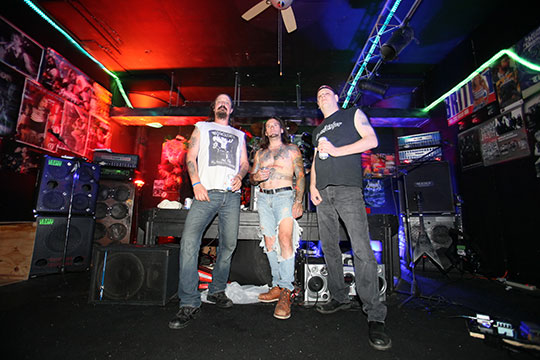