NoiseArt Records and Rock The Nation are proud to announce the signing of Hungarian black metal horde BORNHOLM. They offer an extremely cold, evil version of black metal which has been made even richer by sickening, epic and mind-blowingly aggressive elements. With their incredible, fantastic visual components such as front cover, booklet artwork as well as the official pictures BORNHOLM are way beyond the generic crowd and look down on them from a „throne of crows“. The beast that is „Inexorable Defiance“ will be unleashed early 2013, an extended European tour is in the making. 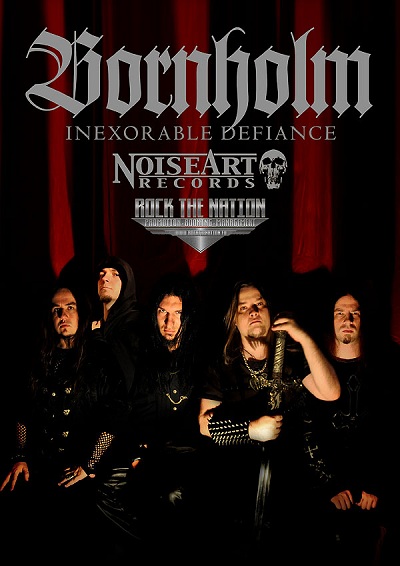 „Since we have began to work on the new album we felt that is a turning point in our history. We wanted new possibilities, new goals and a higher level of playing this kind of music. Now we proudly announce that we have signed to NoiseArt Records/Rock The Nation and this new era has begun. We want much more concerts in the future and a more professional management and we feel that can be a perfect solution. Our third album ‘Inexorable Defiance’ is on the way, we are very proud of it, this is a blueprint of the last years full of majesty, medieval feelings and a unique atmosphere.“ BORNHOLM