The Voice of Human Perversity from Bulgarian Death Metal Veterans ENTHRALLMENT is out today, February 14, on Rebirth the Metal Productions in Europe, South America, and North America. The album is out on Grindhead Records in Australia, New Zealand, and Asia. Mastered by James Murphy in Safehouse Productions, the follow up to 2012’s People from the Lands of Vit (United Guttural) raises the bar yet again with ETHRALLMENT‘s deft blend of U.S. and European Death Metal styles.

The Voice of Human Perversity is streaming in full at the link below: soundcloud.com/enthrallment-official/sets/the-voice-of-human-perversity 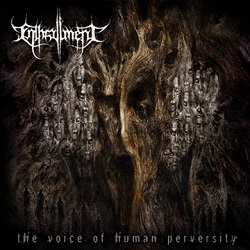 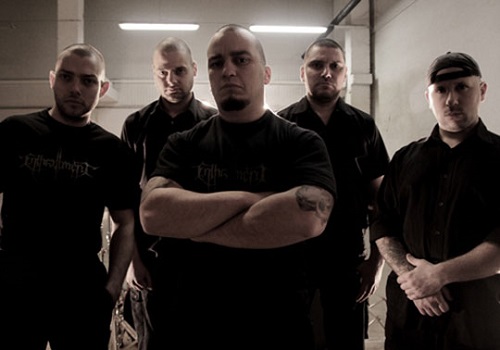 Enthrallment started their existence at the end of the 90s- at the zenith of the death metal industry. Back in 1996 the drummer of the band was enchanted by the new advancing death metal sound and decided to form Enthrallment. In the summer of 1998 the band gathered the complete set of musicians and started a serious work on their first songs. A year later the band realized these songs into their first demo.

Enthrallment distinguish itself from most of the death metal bands in the world with their originality. You never know what these guys will serve you in the next album. They precisely mix USA and European death metal together with a different kind of sound and this makes them unique in the genre of death metal. Many musicians have played in the band and every one of them has left their style in the band’s music and it can be seen in each release.

Their first concerts outside the borders of Bulgaria happened in the year 2004 when on the Serbian festival “Hellhammer” they shared the stage with the Czech band Hypnos and only a few days earlier they had gathered a great number of fans in one of the clubs for extreme music in Bucharest. They also had concerts on the same stage with Destruction, Obituary, Deicide, Vital Remains, Napalm Death, Mystic Circle and many more… It’s also worth mentioning their tour with Malevolent Creation, Rotting Christ and Rotten Sound. In 2011 they played on the Obscene Extreme Festival.

Enthrallment were formed in times of political and social turbulence. In these times the band went through a lot of changes and now they are moving forward, keep on creating new works of depravity.