Italian legend returned to Poland for 9 concerts of “Blasphemer’s Campaign tour” after 22 years since the memorable gig in Zabrze. Bulldozer, hailed as cult band not only in Poland have decided to thank their fans again with one unique release „ALIVE in POLAND 2011”. 16 songs recorded in Warsaw’s Progresja Club is over an hour journey across the discography of BLACK SPEED METAL legend! It’s worth checking that Bulldozer still offers nothing more but pure destruction during their lives shows! Stage daemon attacks!
Limited to 333 units, unique release on two 180 gram vinyls, packed in gatefold. First 100 LPs available only via Witching Hour webstore as ‘die hard’ edition with original ticket and poster from this tour, sticker and patch. 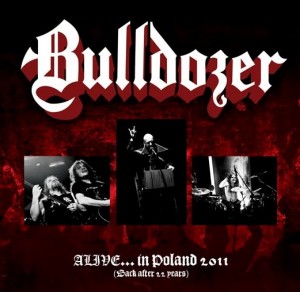