All hail the “Supremacy Of Steel“! CAGE has once again struck gold and forged their sixth release of pure Metal magic. Entitled “Supremacy Of Steel”, CAGE has leapt forward another giant step on the path to Metal greatness by once again delivering a Heavy Metal monstrosity. This is set for worldwide release on November 25th, 2011 through Music Buy Mail in Europe and Heavy Metal Media in The US and rest of the world.

Known for crafting great memorable songs, capturing the essence of the classic NWOBHM sound, and always sounding unique and modern, CAGE somehow effortlessly shows how the limits of the genre can be pushed without losing what makes the Heavy Metal sound a worldwide calling for the faithful. Throughout the 11 tracks, all the smashing CAGE elements are found along with fresh new surprises that are tastefully sprinkled about in just the right fashion. 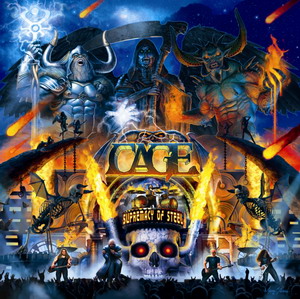 From the blast beats in the opening scream fest “Bloodsteel”, to the eerie KING DIAMOND-like falsettos in “Annaliese Michel”, CAGE fans new and old will be banging their heads with horns in the air throughout this entire long player for decades to come. “Supremacy Of Steel” also contains the epic, long awaited sequel song “Hell Destroyer vs. Metal Devil” and a remake of their unreleased cult classic song, “Braindead Woman”. Anthems like “Metal Empire” and “King Of The Wasteland” will have all Metal fans unable to resist such true, convincing Metal emotion.

Their latest and greatest lineup yet includes the hulking frame of riff master DAVE “Conan” GARCIA, the unmatched vocal diversity and range of singer SEAN “The Hell Destroyer” PECK, drummer NORM “The Legend” LEGGIO also of PSYCHOTIC WALTZ, and debuting the new additions of thunder-thrash guitarist STEVE “Bloodsteel” BROGDEN and the amazing bass playing of one America’s best, PETE “Hands Of” STONE.

All the power and speed from their previous award winning albums has once more been ramped up with faster drums, blazing leads and riffs that will stay with you into the night, and the highest of inhumanly impossible supersonic screams. This is all pointless without great songs but CAGE has always had their song writing as their greatest strength and “Supremacy Of Steel” is absolutely no exception. CAGE has carved yet another stone to fit into the foundation that reinforces their title as the American Power Metal Kings.

As always, CAGE has spared no expense when it comes to the presentation and packaging of their products. The amazing artwork of MARC SASSO (DIO, HALFORD, MARVEL COMICS) depicts the band in a live setting with the very Metal Godz themselves looking down upon the mayhem! The 16 page interior booklet is second to none with various artists chronicling the contents of each song in vivid color and truly has to be seen to be believed. It may be the finest looking metal booklet ever and that is no exaggeration!

The special pre order packages are available at www.cageheavymetal.com and have been extended until October 31st. These will include both bonus tracks, a special sticker, a full color poster, a CDR with unreleased versions and bonus tracks, and other Metal goodies.

Below is a link to the song “Bloodsteel” from the “Supremacy Of Steel” album which features guest artist BITTERFROST on guitar. He can be found at www.bitterfrost.com – Listen to “Bloodsteel“: http://soundcloud.com/heavymetalmedia/bloodsteel