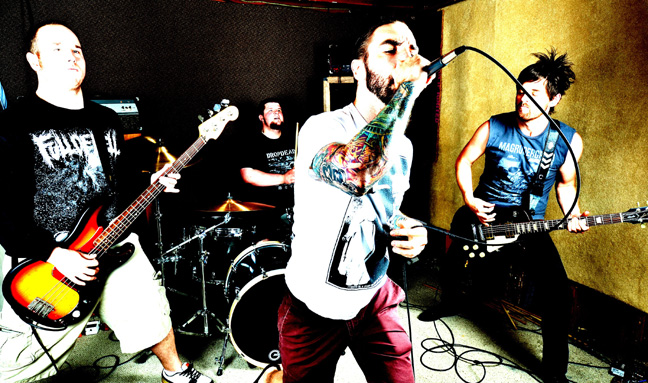 Denver’s Call of the Void bring the ruckus with a video premiere of “Abomination,” brought to you by Revolver here. The tune is featured on the band’s Dragged Down A Dead End Path full-length which reared its menacing head this past Spring.

The video serves as a teaser for Call of the Void‘s forthcoming run of live assaults. The beatings begin September 21st on their home turf and will run through October 22nd. The band will be joined by labelmates Ringworm and Howl as well as Withdrawal on select dates. Additionally, Call of the Void will appear at Denver Black Sky. Founded by legendary Skinless throat Sherwood Webber, Denver Black Sky will be held on December 14th, 2013. The three-stage event will include a very special “Grind In The Round” stage and feature a smoldering lineup of: Dying Fetus, Ghoul, Exhumed, Skinless, Speedwolf, Power Trip, Mammoth Grinder, Reproacher, Weekend Nachos, Iron Reagan, Axeslasher, Primitive Man, Vimana, Of Feather And Bone, Native Daughters, Black Sleep Of Kali, Dead Temple and Flight Of Sleipnir. (See all of their tour dates here.)