For more than three decades, veteran multi-platinum Canadian rockers Loverboy have been lovin’ every minute of it…and now are proud to announce the upcoming worldwide release of ROCK ‘N’ ROLL REVIVAL via Frontiers Records. The album is set for an August 14th release in North America and August 24th in Europe and features nine newly re-recorded Loverboy hits, as well as three brand new songs. Loverboy founder/guitarist and producer of the album, Paul Dean commented, “The new songs on this album are in the same spirit as our classic material. Working with our old friend, Bob Rock, on ‘Heartbreaker’ and ‘No Tomorrow’ was very easy and natural. And, the track ‘Rock ‘n’ Roll Revival’ brought Mike Reno and me back to our collaborative spirit of the 80’s. As far as the classic hits on the album, these songs are reflective of the evolution of our past 30 years of playing them LIVE.”

Next month, Loverboy will hit the road on a massive nationwide tour as special guests supporting Journey and Pat Benatar featuring Neil Giraldo. This tour comes full circle for Loverboy as they played with Journey three decades ago, in support of their iconic album, “Get Lucky.”

Please see below for confirmed tour dates, with more to be announced.

For more than 30 years, LOVERBOY has been “Working for the Weekend” and on weekends, delighting audiences around the world since forming in Calgary, Alberta, Canada. With their trademark red leather pants, bandannas, big rock sound and high-energy live shows, Loverboy has sold more than 10 million albums, earning four multi-platinum plaques, including the four-million-selling GET LUCKY, and a trio of double-platinum releases in their self-titled 1980 debut, 1983’s KEEP IT UP and 1985’s LOVIN’ EVERY MINUTE OF IT. Their string of hits includes, in addition to the anthem “Working for the Weekend,” such arena rock staples as “Lovin’ Every Minute of It,” “This Could Be the Night,” “Hot Girls in Love,” “Heaven In Your Eyes,” “Turn Me Loose,” “When It’s Over,” “Heaven In Your Eyes” and “Queen of the Broken Hearts.” Loverboy is: Mike Reno (vocals), Paul Dean (guitars), Matt Frenette (drums), Doug Johnson (keyboards) and Ken “Spider” Sinnaeve (bass).

ROCK ‘N’ ROLL REVIVAL tracklisting includes:
Rock ‘N’ Roll Revival; No Tomorrow; Heartbreaker; Turn Me Loose; Working For The Weekend; Lovin’ Every Minute of It; The Kid Is Hot Tonight; Lucky Ones; Always On My Mind; Queen Of The Broken Hearts; When It’s Over; Hot Girls In Love. 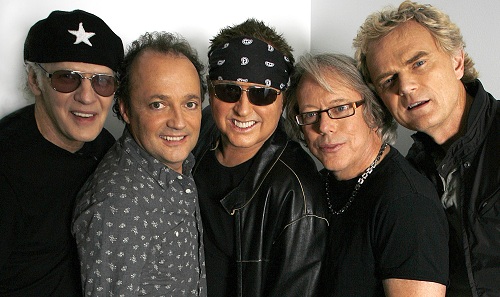