Canadian Power metallers KEMILON announce they have signed a worldwide deal with Maple Metal Records of Toronto, Canada.
Their debut album ‘Twisted Storm’ is set for release in early April, but the exact date has yet to be determined.

Montreal based KEMILON are a 6 piece band formed in late 2007, that first saw the light of day in Sherbrooke, QC with founding members guitarist Chris Geoffroy and his brother Carl on keyboards. After a few member changes along the way, the band settled on their permanent line-up and recorded their debut album ‘Twisted Storm’ in 2011.

‘Twisted Storm’ is produced and recorded by Kemilon guitarist Louis Jacques at Shreds Up Studios in Magog, QC, and the mix was handled by Adam ‘Nolly’ Getgood (Periphery, Red Seas Fire) under the direction of Louis. The album was mastered by Peter In De Betou at Tailor Made Productions in Spånga, Sweden (Amon Amarth, Dark Tranquility, Meshuggah, Opeth, Thin Lizzy, etc) last October.

KEMILON have shared the stage boards with bands like FIREWIND and POWERGLOVE, as well as headlining many shows on the Quebec metal circuit. KEMILON are influenced by the European power metal scene, but bring to the table their own fusion of power and progressive elements, with an emphasis on melody. 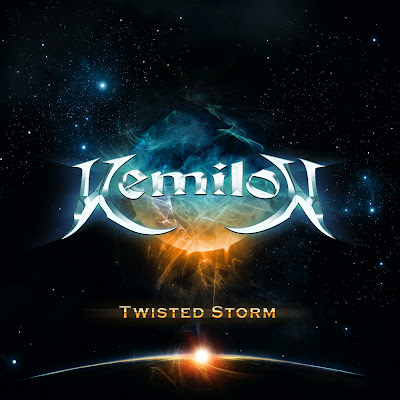