Before the word “Metalcore” existed… Vision Of Disorder did. We did what we did because WE loved it, not because we thought others might. 20 years later we’re, once again, at work with the same approach. After a newly inked deal on Candlelight Records, we are about to begin tracking on our first studio album in a decade. We are bringing all the elements of what made us unique and ferocious to the table. Playing reunion shows over the past few years and seeing such positive responses has truly been inspirational. This album is absolutely dedicated to our fans that have stuck by us through our ups and downs. Without them, it would not have been.

The band will start recording their yet untitled album in the next month or so with Will Putney (Shadows Fall, Suicide Silence, Four Year Strong) and Cameron Webb (Motorhead, Social Distortion, Ignite, Pennywise) will be handling mixing of the album.

Darren Toms, Candlelight’s European label manager, had this to say about the new collaboration:
“I have been a fan of the band since the first release many years ago on Roadrunner/Supersoul and after hearing the new material I’m very excited to be working with the band and getting them back to where they need to be in today’s market.”
“We are excited to be a part of the Candlelight roster. They were a perfect choice for us. After numerous record label woes, it was refreshing to partner with people that are passionate about music- not just profit or agenda.” 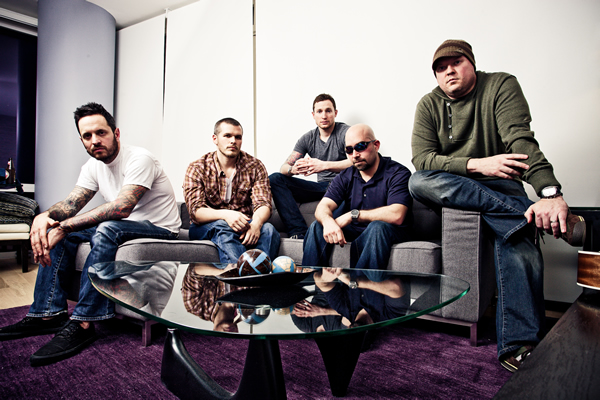 One of the most innovative and widely admired bands to emerge from the never-ending collision between hardcore and metal, Vision Of Disorder exploded from the streets of Long Island, NYC, with their self-titled debut album in 1996. Rapidly established as one of the hottest heavy bands on the planet, they were merely reaping the rewards of several years of hard slog as they honed their daring crossover sound across a series of gritty and groundbreaking demos prior to signing with Roadrunner Records’ Supersoul imprint.

Formed by guitarists Matt Baumbach and Mike Kennedy in 1992 and completed by vocalist Tim Williams, bassist Mike Fleischmann and drummer Brendon Cohen, their first official release was a split single with fellow NY crew Loyal To None, but it was 1995’s seven-inch Still EP that sealed the Roadrunner deal for this groundbreaking riff squad. With a burgeoning underground following who lauded the band’s blending of their traditional hardcore roots with more adventurous melodic and rhythmic elements, VOD were the right band for the right time, as the lines between metal and hardcore became ever more blurred and heavy music entered an era where cross-pollination was the name of the game.

Released in October ’96, Vision Of Disorder was a fearsome and fearless debut that quite rightly put the band firmly on the radar throughout the metal world. Songs like Element, Liberation and D.T.O. sounded simultaneously like the future and the past, and Williams’ impassioned vocal delivery was impossible to dismiss for anyone who demanded sincerity and intensity from their music.

After a great deal of touring and spreading of the VOD word, the band reconvened to create a follow-up record in 1998. Somewhat stymied by raw production values that were effectively forced on them by the limitations of a two-week studio session, Imprint emerged in the summer and received a mixed bag of reviews, ranging from the ecstatic to the disillusioned. The presence of Pantera’s Phil Anselmo on the scorching By The River certainly helped to raise the album’s profile and his endorsement of VOD strengthened ties with the metal scene at large, but the band’s relationship with Roadrunner came to an abrupt end as Imprint failed to surpass the success of its predecessor.

Newly independent, VOD released a collection of re-recorded demos and new material called For The Bleeders in August ’99 on the low-key Go-Kart label, before retreating into the urban shadows to work on their third album. Audibly influenced by southern rock and grunge as much as hardcore or metal, 2001’s From Bliss To Devastation confused many fans but delighted others, adding yet more layers of intrigue and invention to the VOD sonic masterplan. Unfortunately the record was a comparative failure in commercial terms and its creators became disheartened and announced that they were to go on an indefinite hiatus in 2002. Williams and Kennedy teamed up to form epic metalcore merchants Bloodsimple, while Fleischmann and Cohen became members of Karnov. However, the lure of VOD soon proved to be too strong and the band reunited in 2006 for a brief three-song set at a Bloodsimple show in Long Island and received such a rapturous response that they decided to perform a full gig together later that year at NYC’s Super Bowl Of Hardcore fest in Manhattan. Several more reunion shows followed, some of which were filmed for a proposed DVD that would eventually emerge under the title Dead In NY in 2008. Later that same year it was confirmed that VOD were back in action for real and working on material for a new studio album. By mid-2010, the band were on a creative roll and began shopping new material to labels. Shows with Life Of Agony, Biohazard and Glassjaw (during their brief UK run in 2011) added to the growing buzz around the reformed quintet, who entered the studio last spring to piece their latest magnum opus together. In June 2011, Vision Of Disorder unveiled the first fruits of their renewed collaboration, posting new song The Enemy online and generating a storm of excitement and approval.

Finally, over a decade on from their last album, VOD are back. Newly signed with revered underground label Candlelight Records, the Long Island destroyers are set to wreak havoc and incite wild pits across the globe when their brand new yet untitled full-length drops later in 2012. Reliably one step ahead of the game, the new record takes the best from past VOD releases and adds plenty of new ideas and vitality to an already heady brew of savage riffing and fearless proclamations. Let disorder reign!