Metal Hammer called the band’s self-released 4-song demo Pareidolia, “earthy yet horror-themed doom metal a la Candlemass with an Acrimony groove.” The magazine calls Fredrick a “wild-eyed, satanic songstress.” Popular music and film site Ave Noctum notes, “DEMON LUNG has a deft touch and solid sound. Their music is clearly from the soul. Fair to say they are a welcomed addition to the ranks of the doomed.” Teeth of the Divine adds, “Fredrick has the requisite sultry pipes that keep a steady, hazy tone. She has a deep, bluesy voice that fits the languid music perfectly.” 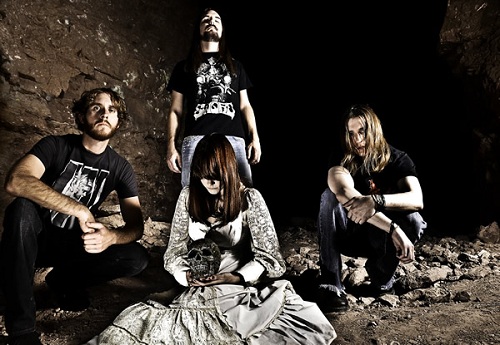 The band comments, “we are very honored to join the Candlelight roster. To be included among such talented artists is very humbling, and we thank the great people at Candlelight for giving us the opportunity.”

DEMON LUNG has performed alongside Pentagram, High on Fire, Jucifer, Witch Mountain and Castle and will resume performing once recording has been completed.

A video for the song “Lament Code” is available to view here: http://www.youtube.com/watch?v=R5y39x8-dhI. Directed by Dustin Mills, the mastermind behind The Puppet Monster Massacre.

You can check out a video from the band here http://youtu.be/YAD16DhOL50