The fifth fat doobie of the American greenhouse will flash the world on June 20th and can now be pre-ordered via the Season of Mist e-shop. CANNABIS CORPSE furthermore reveal the artwork and tracklist of “From Wisdom to Baked”, which can both be viewed below: 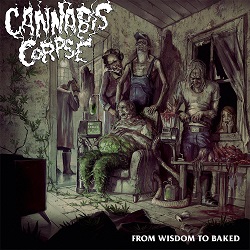 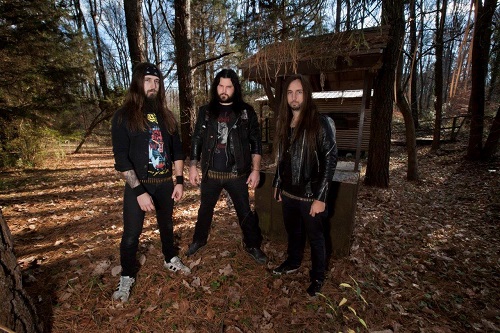 Legendary Canadian Tech Death wizards GORGUTS probably did not see this one coming. Their album title “From Wisdom to Hate” (2001) has been mercilessly inhaled by a bunch of death metal and weed aficionados called CANNABIS CORPSE, who are now blowing it back to the world by naming their forthcoming fourth full-length “From Wisdom to Baked”. Yet it is an honour to be chosen as the butt end of the trio’s spliff driven jests as there is far more toCANNABIS CORPSE than just a parody. Driven by a deep passion for Floridian death metal, MUNICIPAL WASTE bassist and vocalist Phil “LandPhil” Hall started this band together with Josh “Hallhammer” Hall (drums) in 2006 in Richmond, Virginia (USA). Since the two brothers also shared a penchant for marijuana, they changed the stereotypical subjects of this genre dealing with gore, splatter and horror to THC based subjects. A brilliant infusion of a green sense of humour at a time Death Metal had started to take itself rather too seriously. Yet CANNABIS CORPSE proved right from their “Blunted at Birth” debut (2006), through follow up full-length “Tube of the Resinated” (2008) and the EP “The Weeding” (2009) that they were at least a musical match for those influences they paid homage to such as CANNIBAL CORPSE, MORBID ANGEL, DEICIDE, and OBITUARY. With “Beneath Grow Lights Thou Shalt Rise” (2011),CANNABIS CORPSE went a step further. While many of the classic bands had gotten lost in a self generated maze searching for the holy grail of death metal and trying to take the genre to new dimensions often to the disappointment of their old school fans, LandPhil and Hallhammer went the other way. The brothers simply kicked ass. Crushing riffing, relentless pounding from the rhythm section and growls from the bottom of the throat. Accordingly the reactions where overwhelming. “Beneath Grow Lights Thou Shalt Rise” simply had everything that people wanted to hear. The band’s complete catalogue has meanwhile been reissued by Season of Mist. NowCANNABIS CORPSE return to share another massive death metal joint with the world. “From Wisdom to Baked” is made from the same dizzying stuff that made the Americans so popular: straightforward old school death metal executed as close to perfection as it gets, brutally honest and in style. Time to get stoned, high and lit again with CANNABIS CORPSE‘ heaviest sounding album so far!

…have all been reissued in 2013 and are still available on the Season of Mist e-shop!