A smokingly heavy offering of sonic obliteration, contact highs and impending munchies, theSplatterhash 12″ offers up four tracks of rabid, antagonistic lunacy. For their portion of the split, GHOUL returned to Earhammer Studios in Oakland where they recorded both Transmission Zero andSplatterthrash. CANNABIS CORPSE recorded at bassist/vocalist Land Phil’s own Blaze of Torment Studios in Richmond, Virginia. The whole dish of decadence was mastered by Dan Randall at Mammoth Sound in Santa Cruz and features the riotously brilliant cover art of Andrei Bouzikov (Municipal Waste, Skeletonwitch, Toxic Holocaust). The release marks the first CANNABIS CORPSEmaterial to feature Land Phil on vocals and Brent Purgason (Pustulus Maximus of Gwar) on lead guitar. Said Metal Assault of the stony collaboration, “Musically, Splatterhash comes across as a precisely composed slab of extreme metal that is able to convey its musical expression even within such a short duration. Besides, the cover artwork makes the physical formats a wiser choice for the buyer. This is by all means an enjoyable little offering from CANNABIS CORPSE and GHOUL to start the New Year.” Adds Fearnet.com, “Splatterhash is a completely insane romp through a smoke-shrouded graveyard that will bathe you in showers of blood and clouds of skunk-scented bliss… just don’t be surprised if you find yourself hitting the fridge immediately after listening.”

Get spliffy with Splatterhash, now polluting the lungs of the daring at Decibel, RIGHT HERE. 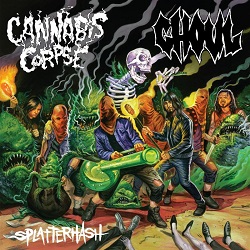 CANNABIS CORPSE, who recently joined the Season Of Mist roster, is a marijuana-themed death metal assault from Richmond, Virginia. Featuring members of Municipal Waste and Gwar, CANNABIS CORPSE pride themselves in their exceptional knowledge of good green, face raping riffs and side-splitting death metal parodies. The masked legion known as GHOUL – Cremator, Fermentor, Digestor, and Dissector – are mutants from Creepsylvania specializing in the implementation of ear-spearing splatterthrash, grave digging and mass flesh consumption. Both bands’ entire catalogs can be streamed (and purchased) via the official Tankcrimes BandCamp Page HERE.

Order Splatterthrash (available in splatter, black or swamp green) if you know what’s good for you at THIS LOCATION.