Following up the bulldozer that was 2010 s Haven for the Insane, Chicago-based death metal purists Cardiac Arrest are set to return this Spring with their highly-anticipated fourth full album. Aptly titled Vortex of Violence, Cardiac Arrest once again demonstrates what true death metal is all about with a vicious and relentless assault of grinding intensity and neck-snapping aggression. Continually pushing their sound to new levels of extremity and excellence, Vortex of Violence is the mark of a band whose primary goal is to write music that will not only outlive, but absolutely crush any trend that attempts to pollute the genre of death metal. 2012 sees Cardiac Arrest poised to rip the coveted Chicago death metal crown off the head of any and all challengers.

Guitarist Tom Knizner had this to say about the release and the recent addition of drummer Nick Gallichio, “Well, the new Cardiac Arrest album, Vortex of Violence is about to be unleashed.  We have been relatively quiet about this release until now.  No need to bore anyone with the details why.  Vortex of Violence was completed in early 2011 and we decided to sit on it until we felt the time was right.  2011 brought about a line-up change and we decided to work with our new drummer, Nick Gallichio, rather than push an album or do extensive live stuff.  2011 was a tough but rewarding year for us, and we look forward to 2012.  Cardiac Arrest will again perform live a handful of times in 2012, so be sure to catch us when you can.  Cheers and beers!”

Guitarist/vocalist Adam Scott added the following, “Alright ladies and gentlemen, it’s with pleasure we give you VORTEX OF VIOLENCE, our new album which will once again be released on Ibex Moon Records. Not gonna sit and yammer about how “this is our greatest album to date” because everyone says that I’m sure you’re sick of hearing that. We hope you enjoy the eleven tracks of Heart Stopping Death Rot that ooze from your speakers!! Til next time…LET THE BLOOD FLOW FREELY!!!!!!”

Vortex of Violence will be released on May 22nd via Ibex Moon Records. Pre-orders are now being accepted at this location and online orders will begin shipping around May 9th. To prepare fans for the aural assault to come, Cardiac Arrest has made the track “Primitive Lunacy” available for streaming on their ReverbNation Page. Wear a helmet…

Cardiac Arrest has announced the following live dates, including a hometown show with the legendary Autopsy, along with Cianide, Bones and Reign Inferno, next weekend (Saturday, May 5th). The band will have copies of Vortex of Violence on hand at the show. 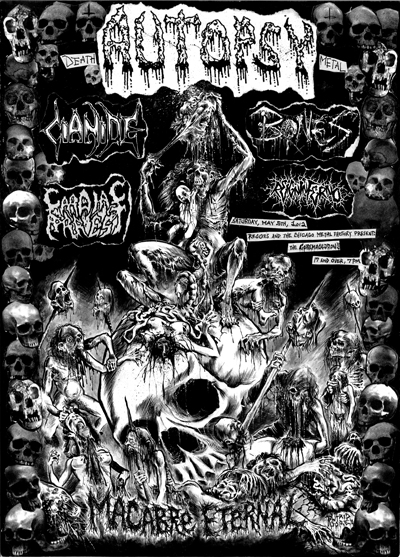 CARDIAC ARREST – Haven For The Insane