Heavy metal cultists CASTLE have unveiled details about their upcoming release Under Siege, scheduled for release on May 16th via Ván Records in Europe. The album, which was recorded at Sharkbite Studios in Oakland, Calif. with producer/mixer Billy Anderson (Cathedral, Sleep), features the below cover artwork from Russian symbolic painter Denis Forkas Kostromitin (Behemoth), with whom the band previously collaborated with on their Juno-nominated 2012 release Blacklands.

While holding onto their darkened and sophisticated classic metal roots, CASTLE further develops their sound with each of the eight tracks of Under Siege by adding punishing riffs and hauntingly melodic passages complimented by Liz Blackwell’s full blooded vocals. Blackwell commented, “On this record I wanted to summon the powerful and unrelenting feeling I get while playing live. I was casting out demons and stating my position in life.” 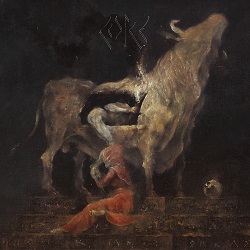 Additionally, CASTLE have revealed an advance preview of their new music video – due later this month – for the song Temple of the Lost, which you can view HERE.

Hot News: Castle reveal music video for ‘Be My Ghost’