After disappearing in a fiery explosion at the end of the “All Or Nothing” video, CAULDRON will rise from their graves this Halloween and come screaming onto a screen near you with their brand new music video for the track “Nitebreaker“.

This Wednesday, October 31st, the most devilish day of the year will get even more macabre, as the Canadian heavy metal trio unleash a tale of pure terror and unimaginable fright.

Tune in to the front page of VEVO.com this Wednesday to witness the spooky spectacle firsthand – and whatever you do, don’t go down to the woods.  The clock is ticking, it’s almost time… 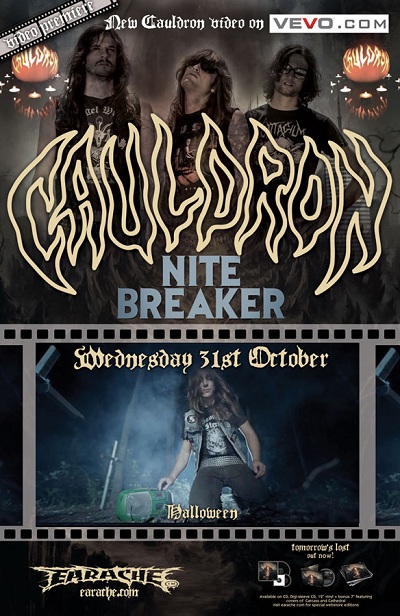 “Nitebreaker” is taken from CAULDRON‘s brand new studio album, TOMORROW’S LOST.  The album is out now in Europe on jewel case CD, digi-sleeve CD with a bonus disc featuring three cover tracks, and limited edition coloured vinyl with a bonus 7″.

See CAULDRON on tour in Europe this November and December:

View the tour flyer at http://earacherecords.com/myspace/cauldron_eu_2012.jpg

Get more CAULDRON news and info at:

CAULDRON – Chained To The Nite