Formed in 2009 after sitting around cranking The Mentors and slammin’ booze all damn night, five sick cunts decided to form CEMETERY LUST to devastate all the wimpy “retro” thrash! Since that time, CEMETERY LUST have been perving out on audiences live throughout the American Northwest, refusing to cease their disgusting death/thrash assault. Blasting drums, hellfukkin’ guitar, and beerpounding kunt-bass are the groundwork underneath some of the most twisted lyrics about rape, necrophilia, Satan, disgusting sex acts, hell, grave desecration, and you guessed it…BOOZE.

A band statement simply reads: “CEMETERY LUST are extremely excited and proud to raise the fukkin’ banner of evil and sign with one of today’s strongest forces in heavy metal – HELLS HEADBANGERS! Only gruesome death and liver failure will follow…” 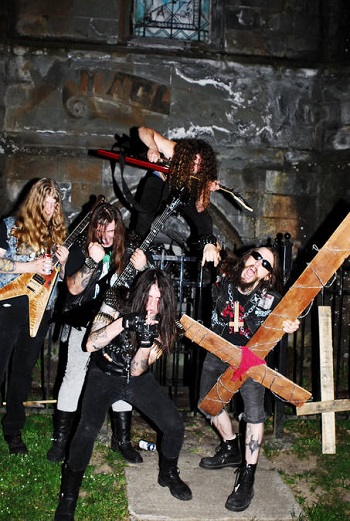