Defying the trends of time, CEREKLOTH are a band trying to capture their own timeless death metal sound on their long-brewing debut album, In the Midst of Life We are in Death. With emphasis on strong compositions and song structures, along with eerie, disharmonic moods and melodies to remember, CEREKLOTH tell the twisted tales of true death from the most bitter and darkest perspective, some even inspired by first-hand real-life experiences.

Formed in 2008 in Denmark, CEREKLOTH have two short releases behind them – 2008’s Pandemonium Prayers and 2011’s Halo of Syringes, both released on 7″ vinyl by HELLS HEADBANGERS – and after some changes in the line-up, the band now stand stronger than ever, consisting of five experienced musicians who lit the CEREKLOTH fire, preparing more material and forging plans for new releases as we await the release of In the Midst of Life We are in Death, which can currently be streamed here: http://hellsheadbangers.bandcamp.com/album/in-the-midst-of-life-we-are-in-death 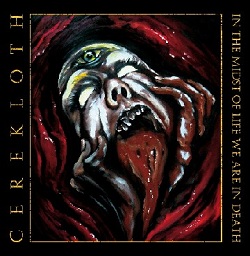 Tracklisting for CEREKLOTH’s In the Midst of Life We are in Death
1. Praeludium
2. Born of the Void 04:55
3. Within the Hollow Crown
4. Halo of Syringes
5. Nest of Disease
6. Mesmerizing Holy Death
7. When Outcast Become Kings
8. The Reapers Instant is Our Eternity