Chaos Records is proud to announce the second offering from Swedish Deathpunk Commandos TURBOCHARGED on September 2nd! Titled Christ Zero, the MCD is 25-minutes of anti-Christian warfare propaganda, including five tracks of theme-based blasphemy. A limited edition (500 copies) four-panel digipak will also be available. Mastered by Rikard Lofgren at Leon Music Studios (VOMITORY, ENFORCER) and burning even hotter than 2010’s AntiXtian, the new EP is highly recommended for fans of VENOM, CHILDREN OF TECHNOLOGY, and DISCHARGE!
Pre-orders are available by clicking HERE.

Chaos Records is currently streaming the track “G-Virus” at this location. 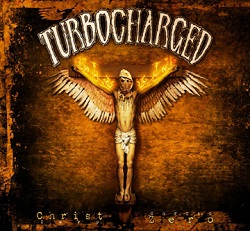 Featuring members from of NEKROKÜLT, DOMINATION, GEHENNAH an DECAPITATE and former member of VOMITORY, TURBOCHARGED was formed back in March
2000 as a trio during a few drunken binges at the local hangout. The idea took shape in a bar but soon moved to a cellar nearby to complete the mayhem. Two months later the first demo was recorded but never released officially. As the years went by the band added members, replaced members and kicked out members and from the original trio the band had as much as five steady members at some points and eventually the line-up ended up being a trio again holding the strongest wills ever to be called TURBOCHARGED.

In 2008 all plans on finding replacements for the lost members were abandoned and the recording of the first officially released demo, Branded Forever, was a fact. Not much happened in the camp for a while but the band for the first time had a focus and an edge they never had experienced before. In 2009 the second demo, Arrogantus Metallus, saw the light of day at basically the same time as TURBOCHARGED was asked to play at a German festival, Thunders over Miriquidi, in Elterlein near the Czech border. Things were starting to look up for the guys and as the year came to an end they had been approached by brand new Polish label Hellrocker Records about releasing the demo as a 12 inch vinyl but since TURBOCHARGED has their own studio the question was raised if it wasn’t time to record a full-length album instead.

Said and done, AntiXtian was written and recorded in the spring of 2010. It was scheduled to be released in August the same year but due to the mandatory delays and all it was finally released on Lemmy’s birthday, December 24th, 2010. Chaos Records also approached the band a few months before the release and offered to seal the deal of a CD-version of the aforementioned album and after some talks back and forth between Chaos Records and TURBOCHARGEDjoined forces. That unholy alliance continues withChrist Zero!

TURBOCHARGED – Above Lords, Below Earth