CHAPEL premiere the new track “Alcoholocaust” at online metal-review encyclopedia Last Rites. The track hails from the forthcoming vinyl pressing of Satan’s Rock N Roll, set for international release on February 10th via INVICTUS PRODUCTIONS. Bowing down before beer, bulletbelts, and Satan, Canada’s CHAPEL put their money where their dirty mouths are with their debut album, Satan’s Rock N Roll. Originally released in 2012 by INVICTUS PRODUCTIONS, this full-length of filth & fury is now finding a long-overdue vinyl LP release, to meet the growing demand for this cult classic. Although overlooked by most upon its original CD release, Satan’s Rock N Roll sure enough found its fanatics, who couldn’t help but submit to CHAPEL‘s sleazy speed metal rush. In little more than a half-hour, the power-trio get in, get out, and leave no prisoners nor take no quarter, the whole headbanging affair engaging from the very first second and up to its very last. For the first time, or the last time…bow down beforeSatan’s Rock N Roll HERE. 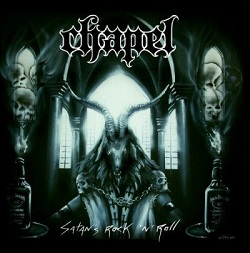