Today, MORIBUND RECORDS announces the signing of CHASMA. A trio from Portland, Oregon, CHASMA are set to release their MORIBUND debut, Declarations of the Grand Artificer, later this year. With three songs clocking in at nearly 33 minutes, CHASMA’sDeclarations of the Grand Artificer is a bewildering but above all transcendent record, an epic recasting of classic black metal into otherworldly shapes and a plausibly modern contour. A specific release date for the album will be announced shortly.

Formed in 2008 by members of Nanda Devi and Alter of Earth, CHASMA began as a side-project to experiment with yet another form of extreme metal. After writing and recording three songs, CHASMA released a demo tape with the French black metal label Aural Offerings and began performing live. After encouragement from Aural Offerings and the local Northwest metal scene, CHASMA made another recording that was released by Aural Offerings on tape and CD. After playing two years of amazing shows with the likes of Wolves in the Throne Room, Bloody Panda, Trees, Thou, Nux Vomica, and Fell Voices, CHASMA guitarist Tony Komforty departed the project and was replaced by Klaus Maza of the LA crust band Sheeeeeeeep. 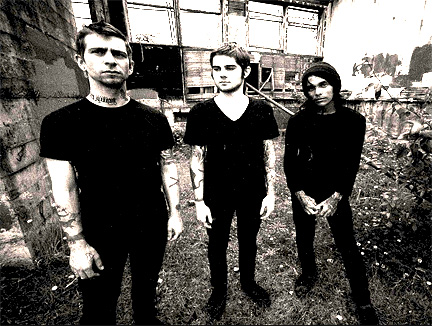 “Musically, we are influenced by new millenium-era French black metal and DC screamo,” says the band, “and bands like Weakling, Joyless, Ameseours, and Majority Rule. We are influenced by the intensity and passion of our brotherhood as musicians and try to express that passion through dimension bending riffs. We don’t really fit the black metal label; we consider ourselves either noir nouveau [‘new black’] or bright metal.“

“We’re so stoked to work with the elite metal cult that is MORIBUND,” the bands says, concluding. “We look forward to crusading across globe under their flag.”