Eagle Records is pleased to announce the release of Ián-Bú, the latest DVD offering from Taiwanese metal collective, CHTHONIC.

The first new video release from the eclectic ensemble in six years includes stunning live footage and extensive bonus features beginning with CHTHONIC‘s full performance at the 2013 Formoz Festival in Taipei, Taiwan, where they were joined by the Chai Feng Traditional Orchestra, as well as renowned Taiwanese opera singer Tang Mei-yun for a collaborative rendition of the track “Defenders Of Bú-Tik Palace.” Additionally, the near-hour-long DVD offers up five spectacular music videos from their recently released Bú-tik full-length: “Defenders Of Bú-Tik Palace,” “Supreme Pain For The Tyrant,” “Sail Into The Sunset’s Fire,” “Set Fire To The Island,” and “Next Republic.” The music videos are an extraordinary blend of martial arts, combat fighting, dance, and drama. CHTHONIC members wire-fly through the air, bathe in water amid torrential downpours and travel through time to a party in the 1930s in an elaborate military alliance between Nazi Germany and the Chinese Nationalist Party (KMT) regime. The production truly highlights CTHONIC‘s irrefutable creativity both onstage and beyond. Other extras include behind-the-scenes footage from the video shoots as well as exclusive interviews with bassist Doris Yeh, director Vince Chuang and various backstage footage. 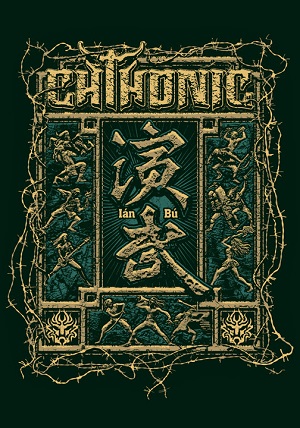 CHTHONIC released their award winning, seventh studio recording, Bú-Tik, via Spinefarm Records last year. Called “a masterful and elegant tradition served underneath soaring thrash-influenced guitars, pummeling drums and a vocal performance that is absolutely stellar from an overlooked vocalist,” by About.com, the critically adored Bú-Tik is centered around the story of the 228 Massacre, the Bú-Tik Palace and the Mirror Of Retribution, and emphasizes what bassist Doris Yeh describes as “righteous violence, justifiable defense, and the armed spirits.” Formed in 1995, with the existing lineup having been together since 2005, CHTHONIC blends metal with traditional Taiwanese instrumentation, mythology, Taoist folklore and the country’s labyrinthine history, each album bearing a deep, conceptual story. CHTHONIC is notorious for their elaborate costumes, stage makeup and highly visual stage shows as well as their outspoken political views on human rights and Taiwanese independence.

Ián-Bú will be available on DVD and Visual Digital Formats via Eagle Records on February 25, 2014.

Hot News: Chthonic To Kick Off European Tour With Satyricon Next Month