Having just recently returned from a highly successful UK tour with Alestorm, those courageuos melodic death metal, ale-guzzling Australian warriors CLAIM THE THRONE have successfully secured endorsement deals with ESP Guitars, Blackstar Amplification, Intune Guitar Picks and Guitar-Cable.com. As the band continues to gather strength and momentum, they are incredibly happy with these new outcomes and look forward to showcasing there new battle gear in the coming months!

Formed in 2005, CLAIM THE THRONE have built a reputation for outrageous live performances and a unique style of metal. After successful Australian, New Zealand and UK tours in support of their last album “TRIUMPH AND BEYOND”, Claim The Throne are now currently writing and rehearsing new material for the forthcoming as yet untitled new album, due for release in late 2012 / early 2013.

TRIUMPH AND BEYOND out now on Prime Cuts Music! 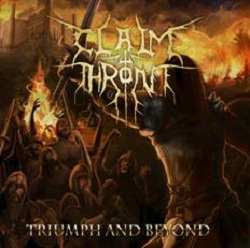