During October Claymords will travel to Parma in Italy to record the next album with the working title: “SCUM OF THE EARTH”.

Wormholedeath will unleash the album world-wide through Aural Music Group.

The release will take place in early 2013.

“After considering a couple of offers, WHD seemed to be the best and the most expanding label. With such a professional and caring attitude it seemed like a natural choice for us. The label has a strong network, and that is everything when you’re releasing an album worldwide. We in CLAYMORDS, feel that WHD has the right vision that a label needs in these days.”

“Wormholdeath is not a money-machine and until the inspiration will lead our label concept we will continue signing adult and experienced bands…Claymords is one of those bands and we rely on them to be part of the new senior roster that doesn’t feature “wannabees”, or “trendy posers”. These guys work really hard and have no stupid ideas in mind, their music is just true … Like their attitude. Moreover they trusted us and we will support in the best possible way their already strong and profitable activity. Watch out for this norwegian combo…They will make another awesome album that will be proudly released through our catalogue. Come on, scum of the earth!”

To celebrate this Claymords are having a party at Norbikers in Oslo, June 29th. Everyone is welcome! (location: Konows gate 69). Before getting into the studio, CLAYMORDS will appear at Hard Anger kick off in Stavanger (Aug 4th @ Folken) and Hard Anger Open Air Metal Festival (Sept 1st @Mĺbřdalen/Eidfjord- http://hard-anger.com). 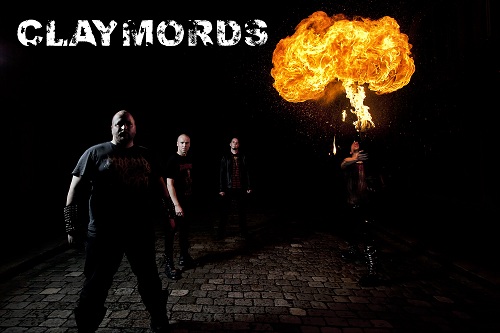 Nils Ivar Martila founded the band in Bergen in the nineties. After recording “more sombre than life” they went touring for a few years in Norway (and Sweden). In 2001 the band broke up, right before releasing a full length album. With a complete new line-up Martila started up the band again in Oslo. In 2009 the touring began. In 2010 Claymords released the album “Theories Written Black” After good reviews on the album, and passing 50 gigs (since 2009) the band was positioning them as strong live act. Claymords has visited Moscow, St.Petersburg, Finland (two tours), Sweden and Norway. On stage the band has had snakes, flames, poet and female duet partners (growling/clean). Intense energy, blistering guitar work by Sune Eggen and high quality entertainment is what you can expect at a Claymords gig. Claymords has appeared in every major media in Norway, known for being a different and bolder act.