Filmed in the derelict Lansdowne Parish Church in Glasgow, Scotland, on a freezing cold December day, the video was captured by Director MJ Dixon of Mycho Pictures.

Written by Paul Logue (Eden’s Curse) and bassist James Murray, “Sky Is Falling Down” is the first single from the bands full-length debut, “Dark Skies Over Babylon“, which is described in the label press release as “a grandiose thematic album based upon the tales of the legendary Knights Templar during the period of the Crusades”.

The four minute composition about the legendary Knights Templar focuses on the protagonists experiences and thoughts, in particular, what it meant in regards to his personal sacrifice and chosen life path. 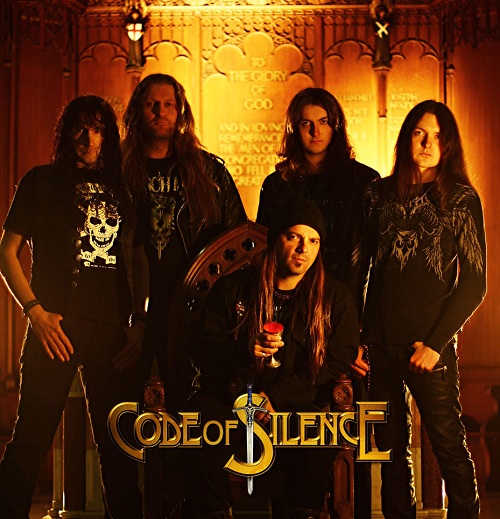 Guitarist Ben Randall (ex-Power Quest) turned heads when he won “The Most Promising Young Guitarist” award at the 2008 inaugural Guitar Idol competition in London at just 17 years old. With a field of over 750 international entrants, Randall wowed judges who praised “his level of technical virtuosity at such a young age, coupled with a level of phrasing beyond his years,” a hallmark of his playing throughout the CODE OF SILENCE debut. The rest of CODE OF SILENCE consists of keyboardist Scott McLean (Falloch, ex-Concept Of Time) and drummer John Clelland (The Crows, The Jack, Karma, The Troubleshooters).

Hot News: Code Of Silence – Introducing the Band and the Album – Video Posted