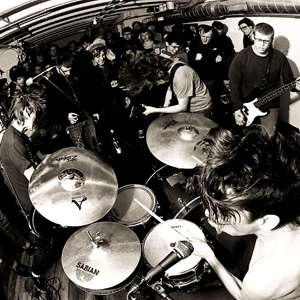 The newest addition to Deathwish Inc.’s roster, Code Orange Kids, are touring down to SXSW this March!  With select dates featuring Former Thieves, Code Orange Kids will head through the midwest and southern states, ultimately ending up in Austin, TX for four days, playing 5+ showcases at the SXSW Music Festival.  Drummer/vocalist Jami Morgan commented, “We are really stoked to hit the road again and play shows with a bunch of our friends and a bunch of bands we love. None of us have ever been to SXSW and we couldn’t be more excited to mix it up for a week and play as many shows as we possibly can.”  Following their shows in Texas, Code Orange Kids will tour back through the midwest on their way home to Pennsylvania – a full list of tour dates can be found below.

Fresh out of high school and with an average age of 18 years old, Pennsylvania’s Code Orange Kids do things their way, creatively cutting their own path through it all. Unconcerned with the direction of other artists, their brand of gritty hardcore/punk is simply refreshing to hear. Merging cryptic melody, dirty hardcore power, and intense dirges into their own uniquely inspired sound, Code Orange Kids recently released their fantastic “Cycles” 7″EP on the Mayfly label, and you can check out the track “Cycles” from the 7″EP here.

Soon, Code Orange Kids will enter the studio to record their debut album, due out on Deathwish in 2012, and more information on that will surface soon.