“Sean Fitzgerald done the artwork for ‘Pantheist'” explains Coldwar guitarist Paul Nash. “The artwork on the album has a symbolic meaning to the subject matter throughout the album”. The darkness of the soul, esoteric symbology, natural evil, scrutinization of the irregularity of the Gregorian calendar, the meltdown crisis point at which capitalist society presently finds itself, and the possible final gasp of our current ‘material age’, to pave way for a potential revolutionary shift in values-consciousness for a jaded humanity. These are some of the varied concepts with which Coldwar lyrically engage on ‘Pantheist’. 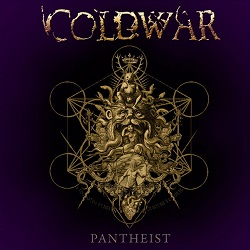 ‘Pantheist’ is out 28th April 2014 via Candlelight Records.