From the holy city of Rome, Comatose Music presents the blasphemous creation known as DEVANGELIC whose debut full-length Resurrection Denied will be released June 24.

Featuring members from PUTRIDITY, VULVECTOMY, and COPROPHILIAC, they aim to perform the most furious death metal possible influenced by the likes of DISGORGE, GORGASM and CONDEMNED. With Resurrection Denied you can expect nine tracks of inexorable guttural brutality against everything that is sacred! Recorded at 16th Cellar Studio. Artwork by Toshihiro Egawa.

Check out the promo video for “Desecrate the Crucifix” at this location.

Pre-order info for Resurrection Denied can be found HERE. 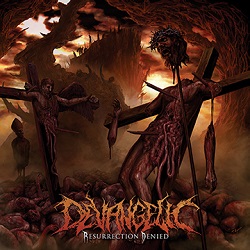