God of Death & Disease, a compilation disc featuring the earliest recordings from death metal legends MORGION, is now available via Dark Descent Records. Check out the webstore at www.DarkDescentRecords.com to order or visit DarkDescentRecords.bandcamp.com for a full album stream.

Before releasing three epic doom/death albums in the mid 90s into the early 2000s, MORGION was ugly. Ugly as in nasty, sweltering death metal. Before finally breaking through with their 1997 full-length debut, Among the Majestic Ruin, MORGION recorded two demos and an EP. These three recordings represent MORGION‘s early pure death metal roots. 1991’s Rabid Decay demo, 1992’s Live Rehearsal demo and 1993’s Travesty EP. In all, over one hour of some of the darkest and nastiest recordings of the early 90’s death metal scene finally compiled and wrapped in cover art by Mark Riddick. Carefully remastered by Ryan Butler of Arcane Digital.

In related news, MORGION has been announced for the 2013 installment of Maryland Death Fest. Originally slated to appear at this year’s fest, MORGION was forced to bow out due to circumstances beyond their control. Check www.marylanddeathfest.com and www.morgion.com for updates and information. 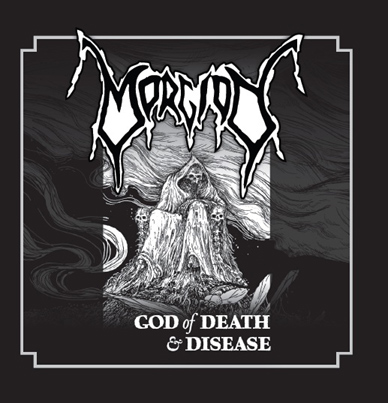