CORONATUS are going to release their new album soon and have shared quite a lot of information with us!

They’ve entered the Klangschmiede Studio E in late May, with Markus Stock as sound engineer and producer.

You’ll hear a familiar voice on the new album as well, because Carmen Lorch, who was the soprano voice on the band’s first three albums, will appear on the album!

Rumor has it, that you can look forward to listen to a song that features all three female vocalists: Carmen, Mareike and Ada!

Lukasz Jaszak is responsible for the cover artwork you can enjoy below!

“Recreatio Carminis” will also be available as limited edition digipak with two bonus tracks. The bonus tracks are two songs – originally taken from the band’s current album “Terra Incognita” –  which have been newly mixed and where Carmen is featured as soprano voice! 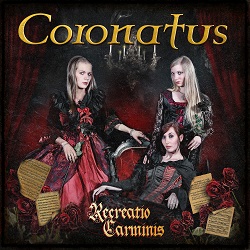 CORONATUS’ new album “Recreatio Carminis” will be released on October 25, 2013 via Massacre Records!