‘Mechanical Tides’ has been slated for release on July 18th and is now available for pre-order throught the Season of Mist shop. 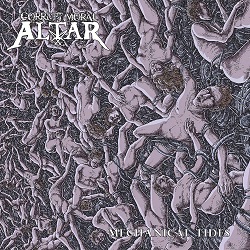 On futher news, CORRUPT MORAL ALTAR have announced a UK tour this summer. The grinding power house will hit the road in Liverpool at Maguires on the 24th of July and continue to rampage through England and Scotland until a final appearance for this leg at the Adelphi in Preston on July 27th.

Furthermore a number of festival dates has been announced with more to follow soon: 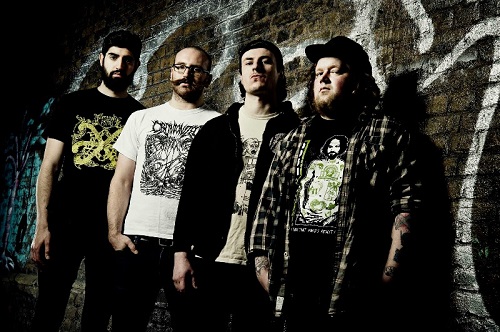 CORRUPT MORAL ALTAR are an angry band. “Mechanical Tides” is an angry album full of angry songs. ‘Anger is an energy’, sounded the battle cry raised by former SEX PISTOLS frontman Johnny “Rotten” Lydon in PIL. Well, what do you expect, when a band is hailing from Liverpool, one of these former industrial northern cities raped and left to rot by Thatcherism. While the fat cats parade around in their white powder keg Porsches in the City of London, the rest of the country is happily left to queue for a charity bowl of soup.CORRUPT MORAL ALTAR connected the dots and reviewed the forever undead spirit of original punk with their founding on the Merseyside in 2012. Filling in the blanks left by decades of musical evolution, the quartet added sludge, grind and hardcore elements to their sound. This fistful of aggression was slammed straight into the faces of their adversaries, creating shockwaves with the immediate release of their “Needle Drugs” demo in the year of their founding as well as the 2013 EPs “Luciferian Deathcult” and “Whiskey Sierra”, which received a glowing welcome in the UK press. CORRUPT MORAL ALTARunderlined their ambitions with intimidating live shows alongside renowned bands such as BRUTAL TRUTH, PSYCROPTIC, EXTREME NOISE TERROR, HOUR OF PENANCE, and more. Now the band is ready to unleash their first full-length “Mechanical Tides” in a worldwide blaze of fury. Open up for CORRUPT MORAL ALTAR and let the anger flow through you! Anger is an energy!