Seven years after their debut full-length (the critically acclaimed “Initial”), the Switzerland-based chaotic post-metal act CORTEZ will release their brand new album “Phoebus” on January 31th. Recorded between the band’s own studio and Rec Studios with Serge Morattel, these ten tracks will be released on deluxe gatefold 2xLP by Throatruiner Records, Basement Apes and Get A Life! (and on CD via Basement Apes & Lost Pilgrims). The artwork has been created by Dehn Sora (Blut Aus Nord, Ulver, Omega Massif…), and the record is up for pre-order and full streaming here: http://music.throatruinerrecords.com/album/phoebus 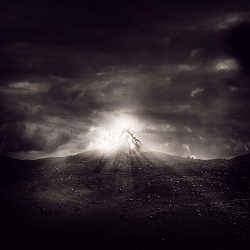 “Phœbus” , the new album of Cortez, confirms the come back of the Swiss trio, just after the release of their 10’’ split with Plebeian Grandstand, on the labels Throatruiner Records, Basement Apes Industries and Get A Life ! Records.

With this album Cortez is again proving that you can get out of the habitual pattern of power trio(guitar, drums and voice), and still burps noise-hardcore fury and incandescent anger. The band recently reorganized itself with the arrival of Antoine Tinguely on the guitar (ex-Berserk For Tea Time), Samuel Vaney, former guitarist, is now supporting the band as composer / mixer.

Recorded partly in the REC Studio of Serge Morattel in Geneva, drums, and partly in their own rehearsal space, guitars and vocals, this new album is the result of hard work, giving the band big freedom in creation and the possibility to fully assume the production process. Complete independence in learning, creating and finalizing the record.

“Phoebus” reaffirms the taste of Cortez for saturation, but also explores a wide range of possibilities. Like a threatening and corrosive mist the aggressive sound still remains intense, melancholic and emotional.
The artwork accompanying this new album has been entrusted to Dehn Sora, bringing a subtle spark to this dark masterpiece.

As a reminder, Cortez, formed in 2001, was revealed in 2005 and the horrific world of their first album “Initial”, was praised by unanimous reviews. After the release followed several tours in Europe, during which the group forged a reputation of exceptional performers. Sharing the stage with THE DILLINGER ESCAPE PLAN, ISIS, UNSANE, JESU, GOJIRA, BURST, THE OCEAN … each occurrence tended to confirm and affirm their originality and mastering of their subject.