RAVEN LORD are currently recording their second album due to be released in 2014. The record will contain tracks from metal guitar virtuoso JOE STUMP combined with modern edge riffage by GEORGE KARAFOTIS GK “The KID“. This next album will also include unreleased material from CRAIG GRUBER’s work wit BLACK SABBATH and RAINBOW.

Singer and songwriter CSABA ZVEKAN will also produce this second record very much in the same manner like the critically acclaimed “Descent to the Underworld” that was released earlier this year.

RAVEN LORD’s singer CSABA ZVEKAN says:”With a smile on my face I seem to go to bed at night only to wake up with the very same expression on my face. I am overjoyed and absolutely happy to work with one of the top notch bass players on this planet. It is much more than that as CRAIG GRUBER has played this music style in all his bands and makes the perfect addition to RAVEN LORD. On top of the good news we are also using songs that didn’t make it on BLACK SABBATH’s “Heaven and Hell” or were songs from the RAINBOW era. This is absolutely fantastic as we can give the fans an up to date version of some lost and found songs.”

CRAIG GRUBER comments on joining the band: “I am very pleased to announce I have been asked to join the newest premier metal band on Earth!! Raven Lord! I have accepted this great opportunity to work record, and tour as bassist starting early Spring 2013. I am looking forward to putting out some great new music this year alongside (Csaba Zvekan, Joe Stump, GK “The Kid”, Rich Smith and Alessandro Duo). We are writing the CD as we speak! Lets put it like this friends…The Rainbow/Dio/Black Sabbath fans are going to be happy once again!! Cheers, see you all at the shows this year!! The RAINBOW SHINES ON!!!.” (Bassist Craig Gruber) 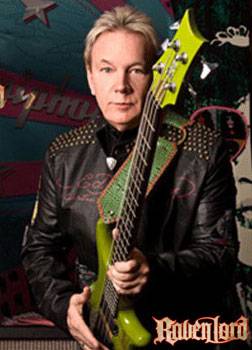 RAVEN LORD’s current line up is: