The first details of the latest album from Norwegian Black Metallers CREST OF DARKNESS have just been revealed. Active on the Norwegian Black Metal scene since the mid-nineties, CREST OF DARKNESS, will release on the 11 February 2013 on My Kingdom Music the sixth full-length of their career, the ten-track album titled “In the Presence of Death” and promises to be the most complete, extreme and dark album the band has ever recorded. 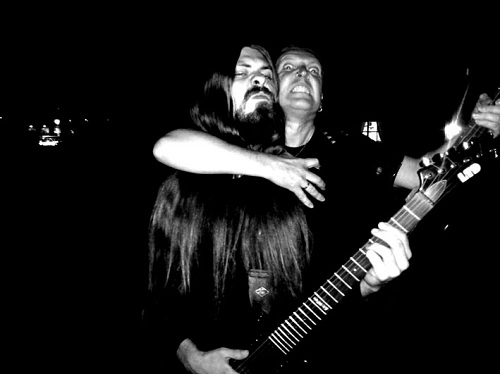 Recently the band announced the addition of DJEVELKULT guitarist Jan Fredrik Solheim (aka Dødsherre Xarim) to replace the outgoing Kjell Arne Hubred, a seven year veteran with the band who was leaving to devote more time to his young family, which, according to Amlien, was entirely understandable given that the band had plans to increase activity with the upcoming release of the album. Solheim, he went on to say has “brought a renewed sense of enthusiasm and purpose to the band, and as far as I’m concerned CREST OF DARKNESS is sounding better and stronger than ever”. Aside from Amlien on bass and vocals and Solheim on guitars, CREST OF DARKNESS’ current lineup includes Rebo on guitars and Kjetil Hektoen on drums.

More details about the album will be available shortly, and further information about CREST OF DARKNESS can be found at www.crestofdarkness.com  *  www.mykingdommusic.net  *  www.facebook.com/crestofdarkness