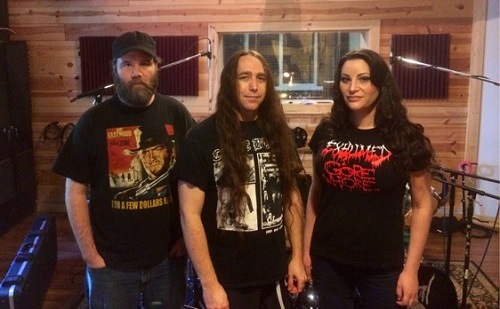 Santa Cruz, CA death metal / grindcore misfits Cretin have entered the studio to begin recording their long-awaited and highly anticipated sophomore release. Due out this Fall via Relapse Records, this will be the quartet’s first new material in over 8 years. The album will be recorded at Compound Recordings in Santa Cruz, CA.

Bassist Matt Widener had this to say about the project: “We have entered Compound Recordings in Santa Cruz, CA to start recording our new album. As usual, we cretins are easily distracted and it takes us years to release anything, so we’re excited to finally crest this stage of the album. Get ready for more cretanic song-stories and proto-grind, backwoods death metal—this time with extra women and a much bigger sound. With “Freakery” you grinded like it was ‘89, now you’ll grind like it’s, uh, ’91?”

More details on the album will be announced shortly!

Formed in 1992 by guitarist and vocalist, Marissa Martinez, and bassist, Matt Widener, Cretin was the Santa Cruz Mountains’ answer to the wave of death metal and grind that was infesting the scene.  After laying dormant for almost a decade, Cretin was resurrected in 2003 when drummer Col Jones quit Exhumed and the trio signed with Relapse Records in 2005 and one year later released their debut album ‘Freakery’.

Life imitated art as Martinez, after suppressing a lifelong gender identity conflict, pursued the steps necessary to blossom into womanhood. Coming out as a transsexual woman to the metal scene in 2008 through an article in Decibel magazine, Marissa Martinez continues to share her transition from gruff metal maniac, to Daddy’s Little Girl.

As the hormones settle, and the sutures heal, the band is at it once more, having recently played the legendary Maryland Deathfest and touring as an opening act on Decibel Magazine’s 2013 Tour with Cannibal Corpse, Napalm Death and Immolation.  Now the quartet is ready to unleash an album that promises to be more furious, more fetishistic, and just plain stranger than the first…