Croatian doom metal legends ASHES YOU LEAVE have inked an endorsement deal with, one of the biggest world’s manufacturer of amplifiers, UK’s Laney.

Ashes you Leave was formed back in 95′ and released five albums since. Their new record, “The Cure for Happiness“, also brings a new AYL sound that combines the warmth of traditional doom and the sound of modern metal. To fulfill this task lead guitarist, Berislav Poje, uses one of the most famous Laney models VH 100 R and GS 412 IA cabinet. Rhythm guitarist, Matija Rempesic, uses the Laney’s newly introduced model Ironheart IRT120 and it’s cabinet IRT 412. “The Cure for Happiness” is due to be released by the end of 2012.

Laney Amplification was founded on September 1st, 1967. It was founded by Lyndon Laney who started building amps for his friends in his parents garden shed. Some of Lyndon’s first customers were local Birmingham-based guitar players such as Tony Iommi of Black Sabbath. Since then Laney set a new standard for “metal” sound. Soon all those who wanted, a more ‘heavy metal’ guitar sound, than other popular amplifier manufacturers offered, turned to Laney. That fact didn’t change to this day! Laney’s artist rooster features some of the most prominent names in metal genre: Tony Iommi of Black Sabbath, Sharlee D’Angelo of Arch Enemy, Mercyful Fate & Witchery, Kiko Loureiro of Angra, Adam Dutkiewicz & Joel Stroetzel of Killswitch Engage, Linde of HIM, Mattias ‘IA’ Eklundh and many more. 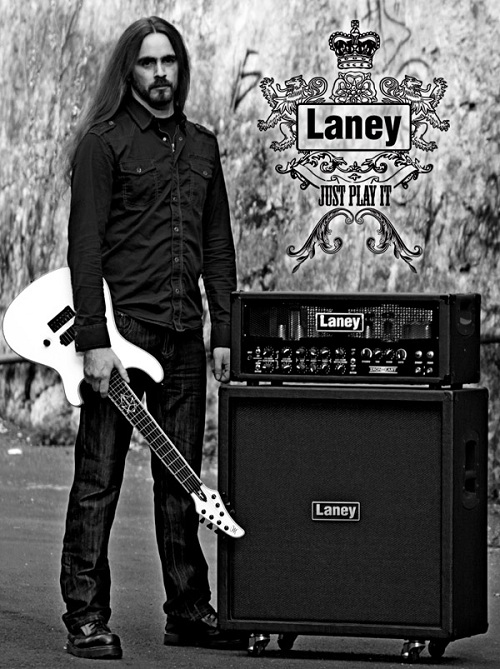 The band would like to take this opportunity to send warm regards to everyone at Laneyand their Croatian distributor Music Centar, especially Mr. Igor Bistrovic. Thank you all for your confidence in the band and demonstrated support!