“The signing of Crucified Barbara fits perfectly in line with our strategy and goal to be a choice for Sweden’s biggest rock bands, where they can work closely with a local Stockholm-based music company on a global basis with an international PR and distribution network. We are incredibly proud that these wonderfully gifted musicians chose to sign with Despotz “ – Ömer Akay, co founder and partner in Despotz Records.

CRUCIFIED BARBARA mixes thrash, sleaze and hard rock, and besided having played support act for, among others, In Flames, Sepultura, Motorhead, Backyard Babies, Doro, they also manage really well on their own and have been touring extensively in Europe. They have also visited Russia, Australia, and both South and North America. 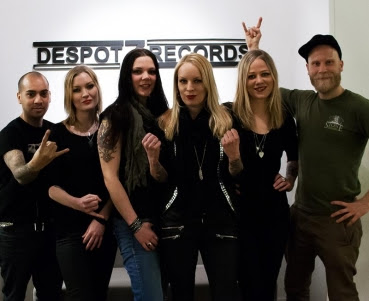 The band formed in 1998 in Stockholm with punk as a first inspiration and part of their music, and it can still be found as a presence in every step they take today, though they have evolved towards a harder, heavier and more contrast-filled rock sound.Their last album was “The Midnight Chase” which was released in 2012. They are currently in the studio completing their fourth album scheduled to be released in August 2014.

“We have more energy and take a much clearer position than ever before, and the result has been so far our absolute best , hardest and most important album. We are super excited to have signed with Despotz , the album of the year deserves a fantastic record label” – CRUCIFIED BARBARA